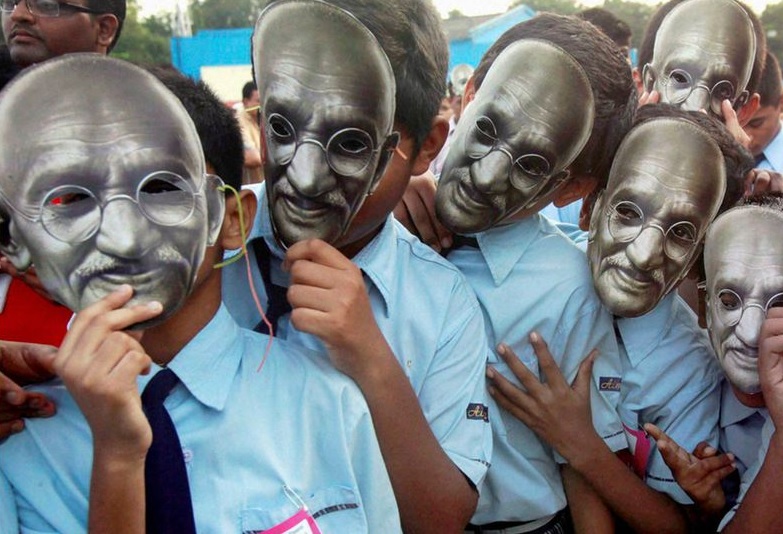 On Oct 2nd, I was channel surfing and noticed the TV channels were airing the movie, Gandhi. For the millionth time.

Then I realized they weren’t airing it for people like me. They were airing it for millions of youths born after 1985 who have probably not seen it.

A lot of young folks born in the mid-eighties tend to get labelled as ‘millenials’ – a catch-all term for a generation that has been raised on the internet, enjoyed more privileges than their predecessors, and who radiate an attitude of ‘entitlement.’

We are quick to judge this generation. ‘You have it easy. You have no idea about our struggles,’ we tell them. But the truth is yes, they don’t have an idea and it is the job of the previous generation (that would be people like me) to educate these youth about our nation’s colonial context, to share with them our stories and the stories of our parents and grandparents.

For over two hundred years, we endured British colonial rule with little or no development. Whatever development occurred had a British agenda. We were a cog in the wheel of Empire.

Yes, there have been countries like Singapore that have managed to build world class public institutions and a robust economy in the same time span but one must also take into account their relatively smaller size.

India had it particularly rough and I don’t think the millenial generation that’s blinkered by social media and the sharing economy fully appreciates the fact that we just recently came out of two hundred years of colonial rule. I don’t think even people in my own generation appreciate that fact. Movies like Gandhi put that in perspective and enable us to be grateful for what we’ve achieved.

I know it’s unfashionable to extol Gandhi’s teachings in this day and age. But as a coach, I can see how many of his teachings can be interpreted for today:

Dignity of labour: This is the golden age of alternative careers. Jobs once looked down upon (DJ, creative writer, emcee, etc.) are viable careers today. The days of studying to become a doctor or an engineer are not only over, they look misguided now. Gandhi expounded the dignity of all labour and I think anyone concerned with how their profession is perceived can remember that and feel reassured.

Simple living: More and more people today are moving away from the glitz and the glut of the consumerist economy and turning to their own backyards to grow their own vegetables and lead a simpler life. Gandhi’s maxim of ‘simple living, high thinking’ is more relevant today than ever before when we are blinded by choice and need to remember that consumerism and technology are not life but only enablers for a life.

Sustainable economy: This point needs no introduction. A lot of companies are exploring alternative sources of energy in order to drive more sustainable business. Many corporations are actively giving back to society. President Obama has placed climate change among his top 3 priorities, right up there with economic resilience and international security.

Fearlessness: Perhaps no one can inspire us to be fearless in the face of an enemy like Gandhi. The man who famously told people to ‘turn the other cheek’ if they were attacked was not teaching a philosophy of weakness. Not reacting to your enemy is a form of strength, not weakness. If you are truly superior to your enemy in thought and practice, you never descend to their level. You come at them from the vantage point of your own level. Gandhi was the most vocal proponent of the key strategy to getting back at one’s enemies: raising the quality of one’s argument instead of raising one’s voice.

Women’s empowerment: Gandhi was one of the earliest advocates of women’s rights. He argued for equal opportunities for women and he had many women among his followers and helpers. Despite having been raised in a traditional Indian household that was patriarchal in nature, Gandhi was quick to recognize the multiplier effects that educating women would have on society.

Truthfulness: ‘Jugaad’ and ‘Chalta hai’ have become cultural touchstones in India. These concepts have practically entered our lexicon as ingenious, resourceful Indian ways of solving a problem. But we also know that what these concepts really imply is an ability to prioritize the ends over the means. But the truth is if 1000 people pay a 100 INR bribe to a cop to let them off the hook, the practice doesn’t automatically become the accepted way of doing things. It is still a wrong practice and it is up to the 1001st person to break the chain. And if he doesn’t, the fault lies in him, not in the ‘system’ that you and I are so quick to blame. We form the system.

We all have the ability to think for ourselves, question the status quo and ‘become the change we want to see in the world’ as Gandhi said. I think that’s good advice as we take on the challenges that mean something to us today.