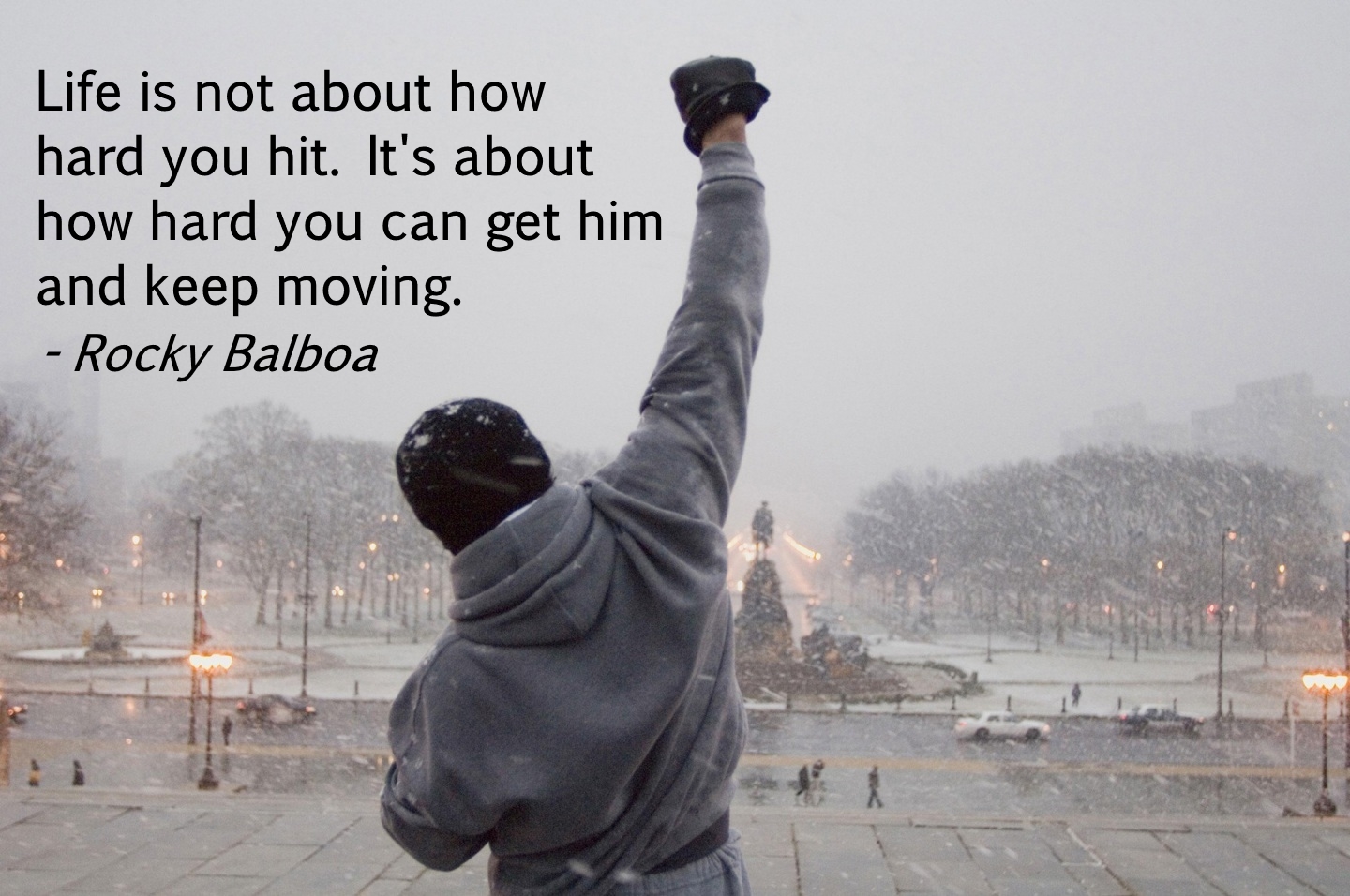 I was watching Rocky again, the 1976 boxing movie starring Sylvester Stallone. And I asked myself, Why is this movie an all-time favourite? Why is it so easy to watch it again and again?

The underdog is the guy who has all the odds stacked against him and yet, who persists. Simply because he has no choice but to persist.

The reasons for not having a choice may be money or love or simply having a personal value at stake. But the fact is he is 1) down 2) not out and 3) will keep fighting until he gets what he wants or dies trying.

And most of us find ourselves in that situation a lot.

We’re getting thrashed at work. We’re facing big communication problems in our marriage. Our kids don’t listen to us. Our parents are constantly undermining our efforts because we didn’t subscribe to their values. And we are, at the end of every day, seemingly very far from the place of our dreams. And then there are all those bills to pay.

And the worst part? We don’t even have the benefit of a rousing soundtrack in the background like Rocky does. We have to do it alone, without music, without magic.

That’s the greatest story never told. Our story. The story of endurance, of staring down a tough situation, and staying in the ring. Rocky illuminates and expands that story of ours, the story of the struggling everyman and that’s why we love it.

I love it for sure and each time I’m down (but not out) I watch the movie or remember some of its lessons. What are they?

If you don’t train, don’t complain: I read a quote somewhere that all human suffering can usually be reduced by the release of sweat. Hard work dissolves our suffering and if it doesn’t eliminate it then at least it gives us the satisfaction that we did whatever we could. As Rocky’s trainer says, ‘There are no short cuts. For a forty-five minute fight, you’ve got to train for forty-five thousand minutes!’

Trust yourself: Self-doubt is the biggest enemy of success. I cannot tell you just how many people I have coached whose biggest problem was not their environment but themselves. They just could not and would not VISUALIZE their success. You have to learn to trust your vision and capability blindly. Only that can get you in the proper frame of mind to make progress. And frame of mind is everything. You can’t win with a losing hand. There’s a quote from the movie: ‘Until you start believing in yourself, you ain’t gonna have a life.’

The hardest way is going all the way: Optimists don’t quit easily, but pessimists just need a few setbacks to pack up. But remember this: ‘Going that one more round when you don’t think you can, that’s what makes all the difference in your life.’ I have faced this many times in my work and you’ve probably faced it too:

You’re stuck in a project and you are very close to junking it all in the bin when suddenly a small breakthrough happens and a few minutes later you can’t believe you were going to quit.

Sometimes, reaching a dead-end is probably the universe’s way of saying, ‘Patience. I need a few minutes to open another door for you. Please don’t go away.’

Bottom-line? If you have a vision and it excites you, prepare to be disappointed from time to time but see the vision through till its end.

Never under estimate your opponent: In modern life, the opponent is yourself. You should never underestimate your mind’s capacity for distraction and quitting. A lot has been written about the legendary indefatigability of the human spirit but I think another story is truer: humans are notoriously susceptible to negativity. It is very easy to pull the plug. Moral cowardice is the most understated evil of our time. The way to ensure you don’t become your own worst enemy is to form an inner architecture of tough habits. Because you become what you do every day, not what you do once in three months.

Selective blindness or the secret sauce of endurance: Now I know a lot has already been written about bouncing back when you’ve taken a hit. So I want to say something different in this regard about persistence. And it’s about the power of selective blindness. Let me tell you how this works.

I once had a partner who had a short fuse. When I gave him useful feedback about his work, he took it personally and started to retaliate. Soon, work was suffering because it was getting crowded out by his ego. What’s more, I realised that when this happened, my blood started to boil too and I added to the fire.

When I realized I wasn’t going anywhere I decided to use a different strategy: selective blindness and deafness. So my partner would say something annoying but I would NOT LISTEN. I’d pretend I didn’t hear it. Instead I would gently repeat what I said earlier – just the content, no emotion.

This continued until I wore him down. If I didn’t wear down his anger, then at least I didn’t waste my anger.

I would rephrase that for modern times to say, ‘It’s not about how aggressive you can get. It’s about how much you can ignore and keep moving forward. That’s how winning is done!’

Last but not the least, Rocky had a coach to help him control his demons and keep his eye on the prize. Yes, a good coach can go a long way in helping us achieve our goals.