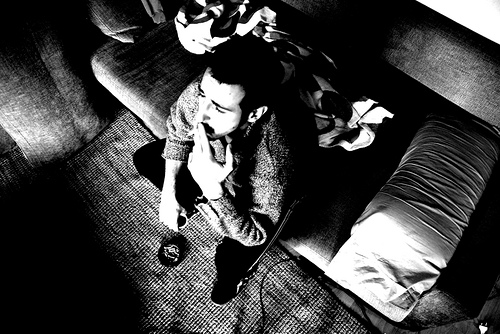 The sign said, ‘Department of Enlightened Pessimism.’ I walked in, curious. A woman sat behind a table, going over some files. When she saw me, she smiled. Her smile was easy but still only polite. “Hello. What have you been thinking about?” she asked. Even though I didn’t know her, I felt at ease somehow. I felt I could just speak my mind.

“I’ve been thinking about my on-going project,” I said. “It’s important. And it’s getting complicated. I am tense. I really want to get it right.”

“You won’t get it right,” the woman said, still smiling.

“I won’t?” I asked, my eyebrows furrowing.

“That doesn’t sound very comforting.” I was starting to understand at least the ‘pessimism’ part of this department’s name.

“At first, yes it’s not very comforting. But one gets used to the idea.”

“That life is chaos. People are crazy. And no matter what you do, you will get it all wrong anyway. Nothing is really in your control. It’s a jungle out there. All you have is your wits. And a broken flashlight. So why so much expectation? Let go.”

“Let go? Meaning sit back and do nothing?”

“Oh no. I didn’t tell you to not do your best. I just told you to let go of your powerful desire to get it right. Because. You. Won’t. Ever. Get. It. Right.”

Later, I stepped out of the Department of Enlightened Pessimism and looked around. It was a sunny, pleasant day. I started to walk down the pavement. The woman’s words echoed in my head. Let go of the desire to get it right. I had never thought of it that way. It was oddly liberating. In fact, it was a load off. I felt so relieved! But could one really live like this? Wasn’t it just an elegant way of giving up?

“The campaign idea bombed.” It was my partner.

“OK. What are they saying?”

“They’re saying no one in the focus group got it. We need to go back to the drawing board. To tell you the truth, I’m a little disappointed. Do you think we’ll get this right?”

I smiled at a passer-by and her child who was doing a little dance.

Right or wrong. Good or bad. Perfect or imperfect. Success or failure. Gay or straight.

When and how did we narrow life down to the tyranny of binary?

“Tell you what,” I said. “Forget about what’s right. We don’t know what’s right. In fact, we’ll never get it right. And that’s OK.”

A pause. “What are you talking about?” my partner asked.

“Nothing. Forget it. Tell you what, let’s just create something beautiful. How does that sound? Let’s just make art. Let’s just fall in love with what we’re making. Love is neither right nor wrong. Love just soars off of the page.”

“Woah. Nice. What have you been drinking?”

I drove back to the office. The bikers cut into my lane. My father called me three times, despite cutting his call. A hoarding said the tax slab was being revised against my favour. My campaign idea had just bombed. I forgave them all. I forgave even myself. It’s a jungle out here. All I have is my wits. And a broken flashlight. I am so imperfect. I am so free.